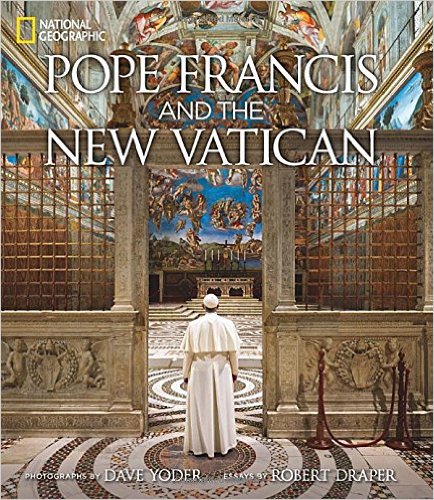 Pope Francis and the New Vatican

National Geographic goes behind-the-scenes of the new papacy with unprecedented, exclusive access to Pope Francis. Embedded with the Pope inside the Vatican for 6 months, award-winning photographer David Yoder captures intimate moments in never-before-seen photographs presented here for the first time--including in the Sistine Chapel with the Pope alone on Christmas Day. These extraordinary images reveal the majesty and splendor of the Vatican alongside the humbleness of the man changing it--a compelling juxtaposition. The pontiff's public life and personal crusades are exposed as never before, as well as the inner workings of the Vatican--a uniquely powerful state.

Complementary essays by acclaimed journalist and author Robert Draper--drawn from interviews around the world with many who had never spoken publicly before--insightfully cover Pope Francis's personal story, his journey to the papacy, and the heart of his ministry. The book also features a timeline, maps, and Pope Francis's most inspiring words of wisdom.

The "people's Pope" has electrified the world with his message of mercy and humility, energizing the Catholic Church and appealing to people of every faith. National Geographic's vivid reporting and world-class photography present a captivating view of Pope Francis and his remarkable papacy. This glorious celebration of the new pontiff is timed to coincide with his first visit to the U.S. and is a lasting keepsake of a historic event.

Sold Out
Add to Cart